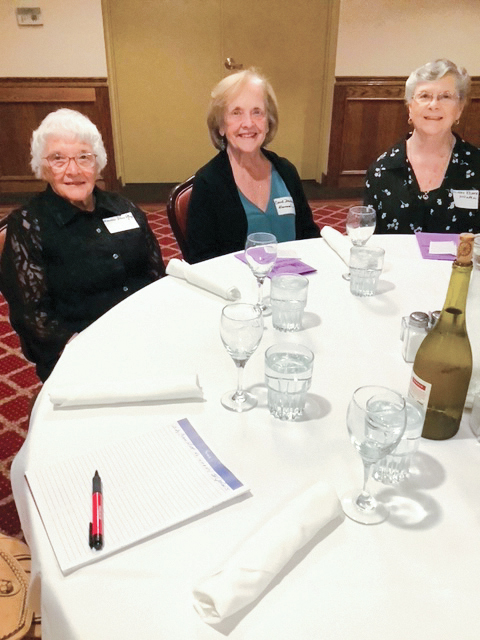 When former students from the Academy of our Lady and Spalding Institute gathered together for their 65th Class reunion this past September, they met first at Peoria Notre Dame High School in Peoria for Mass. That building was not even a thought or consideration when the Class of 1957 was graduating. There were two Catholic High Schools in the Peoria area at that time, Spalding Institute and the Academy of our Lady. Spalding, located at the corner of Madison Avenue and Jackson Street was established as a Catholic High School in 1899. The Academy (AOL), at 401 NE Madison Avenue, traces its lineage back to 1863.

In the yearbook of 1957, 140 girls and 98 boys are listed as students, in addition to six women in religious habits likely completing their education. (No explanation is included.)  The yearbook contains 187 pages, with 45 of them for advertising allowing plenty of room for students to write messages to classmates. Looking at the pictures and noticing the differences in hair styles, both male and female, clothing, shoes, and other accessories makes for interesting comparisons between then and now.

While the two buildings remain standing, they are no longer used for their original educational intentions. It’s interesting to drive by, reminisce, think about the students who walked those steps and hallways through the years, recall the priests, nuns, and lay teachers who taught there, and try to remember the highlights of being a student there. As with any school, such thinking back involves remembering the good, the not so good, the funny, the awkward, and the eagerness many felt to be finished with all the scholastics and homework. For the group celebrating their 65th Class Reunion on Saturday, September 24, 2022, the sentiments ran in many different directions. And during the evening there was considerable pleasure in the warm welcomes for folks who maybe hadn’t seen each other since 1957. Obviously much has changed, some for the better with other changes not so positive. But coming together to visit and laugh and talk made for a very enjoyable time.

The program for the evening began with Mass at Notre Dame High School. One of the students from the class, Kenneth Marchulones, was to be the Mass celebrant as he was a priest in the Peoria Diocese ordained on May 23, 1965, at St. Mary’s Cathedral in Peoria. He had served as Principal at the former Bergan High School in Peoria, and in 1984 was named Pastor of St. Monica Church until his retirement in 2010. Sadly he passed away July 29th, 2022. Father Jeremy Freehill, Pastor at St. Ann’s Church in Peoria was acquainted with Father Ken, and he offered the Mass.

Dinner was at the Lariat Club in Peoria, with Hosts Judy Carman, Elaine Clark, Mary Carrara Stickelmaier, Jim Stickelmaier, and Bill Troy welcoming former classmates and their companions as they all gathered for beverages and a buffet dinner, followed by a dessert bar and coffee and tea. As with almost any class reunion, there are those apprehensive moments at the beginning where there’s concern about who will be there, what if people don’t recognize me, what if I don’t recognize people, and on it might go. But such concerns don’t last long and after checking in with some people later, there were rave reviews and even questions about “when will we do this again?”

Some people have wonderful memories about high school, others are ambivalent about most of it, a few or maybe more than a few found high school to be challenging in the classroom and out of it. They may have found it difficult fitting in and they were eager to be finished. That’s not to say they didn’t do well in other areas of learning. They may have gone on to excel in college. Not everyone finds their comfort zone at the same time. And some former students admit they did okay but wouldn’t want to do it again. Memory can play tricks on how things really were, and sometimes a few years later, or maybe many years later, it looks differently, when looking back. It seems more friendly.

Comments were made about people enjoying being together; what a good time they had; what a wonderful time; I hope we do it again; let’s not wait so long to get together. Organizing such an event takes time and there’s always concern about not having enough people attend. But numbers themselves don’t really make the difference. Enthusiasm, laughter, conversation, funny incidents from years ago, and the sincere interest in how others are doing can make all the difference in people’s perceptions and enjoyment.

Some folks would like to see the next reunion held during the daytime as some people are prohibited from driving at night and have transportation challenges. It was also suggested that future reunions are scheduled sooner than five years. Some of the guys meet on the third Tuesday of the month and reminder cards are sent out monthly. Some women also meet monthly.

If the school you attended has class reunions, and you’ve never gone, or maybe you only went once, there’s a group of people who would highly recommend you go the reunion. If you didn’t have fun at your 25th, well things change through the years. The person who gave you grief years ago may have changed immensely, and you’d have a great time visiting with him/her and others. Go with a positive outlook and if you’re disappointed at the end of the evening or afternoon, well, you gave it your best.

In the meantime, dig out that yearbook, spend the afternoon looking at what were once familiar faces, reminisce if you are so inclined, and do the math and see when your next reunion is likely to happen. Wishing all a good time and sweet memories!