A Man of Much Determination 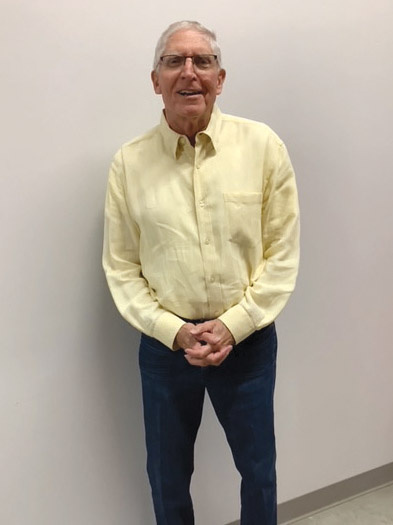 Various words help describe native Peorian Tom Bower. He’s lived an interesting, busy, challenging life, helping others, working hard to overcome difficult health issues, and sharing his experiences with others to help them. Tom believes firmly that “suffering is inevitable, but pain is not.”  And pain doesn’t have to mark the end of a good life because it’s not necessarily a life sentence. Health issues that began in 1982 have caused him considerable pain and frustration, but he hasn’t given up and is intent on sharing what he’s learned so others may benefit accordingly.

He wears many hats, including that of mentor, coach, teacher, public speaker, and he works with individuals, corporations, and businesses. “I’m happiest when working,” he says, adding that he believes “people on the move are happiest.”  He and his wife, Cheryl, are the parents of three grown children and they have three grandchildren. At 78 he doesn’t mention retirement, but he does talk about the walking he does three times a week, the fatigue he experiences, the health issues he has struggled with, and what helps him maintain his optimism and perseverance.

In 1982 Tom began having symptoms and experiencing uncontrollable head shaking from side to side, with muscles in his neck going into painful spasms. Eager to be helpful, both for his situation and that of others, he has served as president of a national support and advocacy group trying to make life easier for people diagnosed with spasmodic torticollis. Tom has had many examinations, has been to Iowa City, Milwaukee, Toledo, Pittsburgh, Raleigh Durham, Kansas City, and eventually Mayo Clinic. Torticollis, which is believed to be caused by a dysfunction in the brain, was diagnosed. Botox was recommended and injections were given in the back of the neck four times a year. “It relieved the pain,” says Tom. This was in the early ’90s.

While there were two deep brain stimulation consultations at Vanderbilt in 2018 to improve the Cervical Dystonia symptoms, two surgeries were done at Northwestern Medical in Chicago in May and June of 2019. Implants in the brain send electronic pulses to quiet the nerves that cause muscle spasm and pain. “I hesitate to say I’m cured now, but it’s close,” says Tom gratefully.

Grateful for the progress he has made, Tom explains there are still challenges in his life. He used to be a runner, but he can’t do that any longer because of pain, and swimming is no longer something he can do. “It’s in my neck and radiates down my back and into my scalp and it hurts. It’s like arthritic pain. I get very tired and by late afternoon I am finished and need to rest.”  He’s up early in the morning, like at 6:30 a.m. and is handy around the house, where household chores and projects are shared with his wife. His office is also in the family home.

In spite of his health challenges, Tom is a man of many interests, and many of them concern making life more fulfilling for himself and others. “I meet people easily,” he says, pleased with such good fortune. And when he meets people, he believes “that it is not by accident.”  An active member of Rotary, and a dedicated parishioner of St. Thomas Catholic Church in Peoria Heights, he says he feels fortunate and blessed to be in such company. He says, “I am not overwhelmed by anything. This is the way the good Lord made me.”

As a man keenly interested in life and making it better and helping others, he is frequently involved in various projects. His current passion is Leaders Life Forum, a management and leadership group helping others discover opportunities for self-improvement, better decision-making, working together, and learning from each other. “Organized in six, three-hour workshops, all participants will be asked to attend two workshops per month and be offered additional strategies to read relevant material and complete prep work in advance of each session.”  Learning to apply learnings and report back each month is also required.

“People are from varied walks of life, and include a variety of topics,” Tom explains enthusiastically. “Among themes and topics are Building & Communicating Strategy; Coaching & Leading Up; Work-life Balance & Burnout; Building a Leadership Philosophy, and others.”

Grateful for his experience of having served in the United States Air Force in France and Tripoli, he completed his tour of duty in Kansas. He graduated from Northwestern University in 1969 majoring in marketing and began managing Bower Buick from 1969 to 1982. From 2010 to 2019 he was involved as an adjunct professor at Bradley University teaching business, management, and leadership, and was an assistant MBA executive for special projects.

In addition to his varied projects that he is involved in, Tom has a sense of going beyond the obvious to inspire people and to remind himself the importance of reaching out to others to help make the world a better, kinder place. He has compiled his personal choice of “words to live by.”  Number one, no egos. He explains, “Some people have monstrous egos. I don’t believe that way. They may be lying to themselves. You don’t have to remind me of your good.” Point number two, tell someone every day that you care about them. “This is the way I am. The compliment can be repeated more than once to the same person. It can’t be said too often.” Point number three, courage belongs to the bold.

With all of his involvement in projects, working, health issues, communication, and living life to the fullest, it is evident he is a man who values life and wants to share it. “I want people to know it doesn’t have to be the end,” he says gratefully.