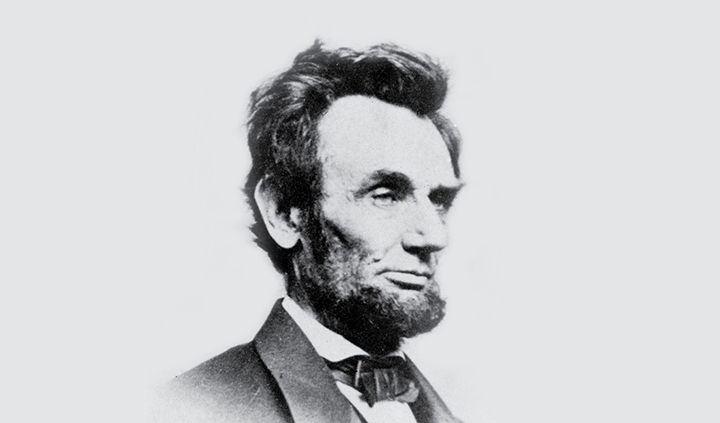 Submitted by The Abraham Lincoln Presidential Library and Museum

February 12, 1809, passed quietly in America.  No major conflict was taking place, no major legislation was being debated, and no elections were being held.  Yet this was one of the most important days in American history: Abraham Lincoln was born in a small log cabin in Kentucky.

His birthday offers the perfect opportunity to reflect on Lincoln’s life and how much his story is also the story of America. The Abraham Lincoln Presidential Library and Museum celebrates by admitting visitors free of charge.

On one side of the museum’s main plaza is a log cabin with a youthful Lincoln sitting outside, book in hand. On the other side of the plaza is the White House. His journey from one place to the other is a miracle of intelligence, tenacity, and good judgment.

With virtually no formal education, Lincoln had to teach himself if he wanted to learn. He read everything he could get his hands on in the wilderness. He talked to folks, learning their stories and absorbing any information about the world beyond his little community.

Lincoln wanted a different life, but he didn’t know exactly what that life should be. So, he set out on his own in Illinois and tried plenty of different jobs—and suffered plenty of setbacks, including business failures and political defeats. Even the famous Lincoln-Douglas debates ended with Lincoln being defeated in his race for the U.S. Senate.

Yet his ability to learn from setbacks and mistakes defined his character. “I find quite as much material for a lecture in those points wherein I have failed, as in those wherein I have been moderately successful,” he would say.

A journey through the Lincoln Presidential Museum captures the notion of how anyone can change the world. It shows how an unknown boy could wind up with the words “Lincoln the Savior” above his coffin.

It’s important to remember that behind the Lincoln legend was a flesh-and-blood person. The museum shows us Lincoln selling goods to a woman in a crude New Salem store. Further on, a chaotic hallway featuring some of the newspaper attacks and verbal abuse Lincoln endured leads to a somber scene in which the worried father checks on his dying son.

After his election, Lincoln guided a shattered nation through the greatest crisis it has ever experienced. Four long, bloody years of war rocked the young nation to its core. Without Lincoln’s sharp intellect, steady hand, and steadfast determination, the American experiment would have failed. In preserving this nation, Lincoln gave his life.

Abraham Lincoln is now a fixture of popular culture. At one end of the spectrum, he is enshrined on the penny and the five-dollar bill, while the French constitution borrows his words to state that the nation’s principle is “Government of the people, by the people, and for the people.” At the other end, he shows up on mattress ads and movies about vampires.

Perhaps most importantly, the story of “Honest Abe” is told to children as a lesson on morality.

Everything that Abraham Lincoln has come to symbolize, from the words of foreign constitutions and the monuments of America to the money we spend and the stories we tell our children, started on a quiet Sunday in a secluded log cabin in Kentucky.

Plan your visit to the Abraham Lincoln Presidential Library and Museum to learn more about our sixteenth president. Visit our website at www.presidentLincoln.Illinois.gov or call 217-558-8844. We are located at 212 N. 6th Street, Springfield, IL.