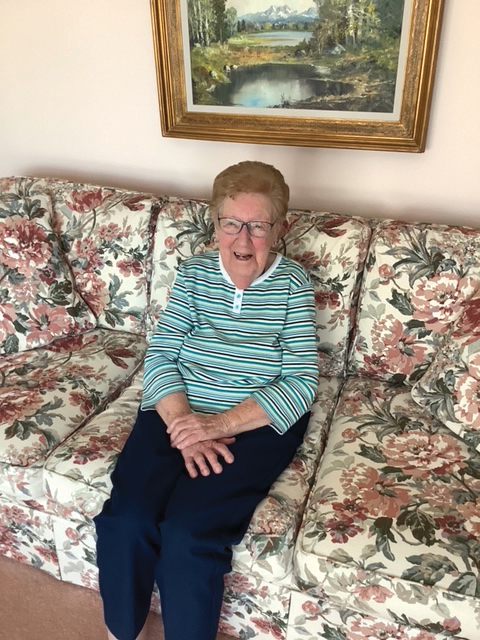 Longevity can be inherited, based on one’s family, health, good luck, and myriad other details. Physicians tell us there are steps we can take, and a healthy lifestyle to follow that can help us increase the amount of time we spend on planet earth. Others believe we don’t have much “control” over our health, citing examples of people who died young even though they followed a healthy lifestyle. While great choices don’t guarantee excellent outcomes, it is a good way to help foster the likelihood of a long life.

Louise Willis doesn’t necessarily spend a lot of time analyzing her health habits, but having celebrated her 100th birthday​‌ on October 24, 2022, it’s pretty obvious she’s doing many more than a few things right. Her list of accomplishments is lengthy, and she takes pride in what she has done, while remaining modest about her efforts. She grew up in Rushville on a farm, and had two older brothers who also lived a long life. She worked at Caterpillar in the 1950s and she and her husband, Charles, were married in August of 1951. The couple enjoyed many years of marriage. They moved to Peoria in 1962 where they raised their two daughters, Carole and Dolores. Louise also has a granddaughter, Laura Gene, and two great-grandchildren, Karmin Isabella and Bodhi Jean.

Her comments are positive and it’s easy to tell, she enjoyed doing all that she did. The list includes but is not limited to babysitting for the women’s bowling league and she started the Woodrow Wilson Mother’s Club bowling league and she was still bowling into her 80s. She was an election judge for some 46 years; She also attended the Woodrow Wilson Mother’s Club monthly meetings and volunteered for the school’s fundraisers to include bake sales, and annual Chili and Carnival Festivals. She volunteered her services at Peoria High while her younger daughter attended High School in the late 1970s.

Louise has lots of happy memories, she laughs easily, willing to answer questions, but never responding in a bragging way. “I basically managed the house,” she says, proudly but humbly. She painted, wallpapered, was still mowing the lawn at age 96, but quit at age 97. She does like to buy the gas for her mower. She also makes handmade quilts. “The last one I made was about a year ago.”   Her modesty about her accomplishments is charming. She simply tells you how it was and moves on.

“I did my own cooking,” she explains and dinner was at 5:00. When her husband Charles retired, she explains, smiling as she tells the story, he thought she would be making lunch each day since she made breakfast and dinner. She didn’t exactly say no, but she didn’t exactly say yes. The impression was they negotiated the terms and it worked out to their satisfaction. Describing herself as a “simple person,” she says she already has everything she wants. She is a member of First English Lutheran Church, the oldest member in the church. For the most part she was a homemaker, explaining it as, “I did a little bit of everything.”  Indeed she did, but there’s no bragging, just simply stating the reality.

She has enjoyed traveling and has been to the Ozarks, Niagara Falls, Yellowstone, Mt. Rushmore, Florida, Virginia, Missouri, Oregon for a family reunion, California, Texas, Arizona, and Kwajalein Island in the Marshall Islands. She also takes pleasure in feeding the birds and squirrels and watching the wildlife. Eating out is a favorite activity and Gill’s in Hanna City, Avanti’s, and Culvers are among her favorites. And she loves chocolate!

Since 1962 she has kept a yearly calendar briefly writing about “news” and interesting things to remember, and she likes referring to it. She enjoys solitaire and bingo, she likes to sit outside when the weather cooperates, and she’s a Wheel of Fortune Fan along with Jeopardy. One of many things she particularly enjoys is going on the Senior Living Tour that is sponsored by 50 Plus News & Views. It is estimated she has gone some 17 times. Her daughter Dolores says, “She loves going, enjoys the outing, and gets to see friends.”

When asked if God called her home tonight, would you be okay with that?  Louise smiled, shook her head, and said, “Yes.”  But until God calls it’s very easy to imagine she will continue doing those various activities that bring her enjoyment and satisfaction!