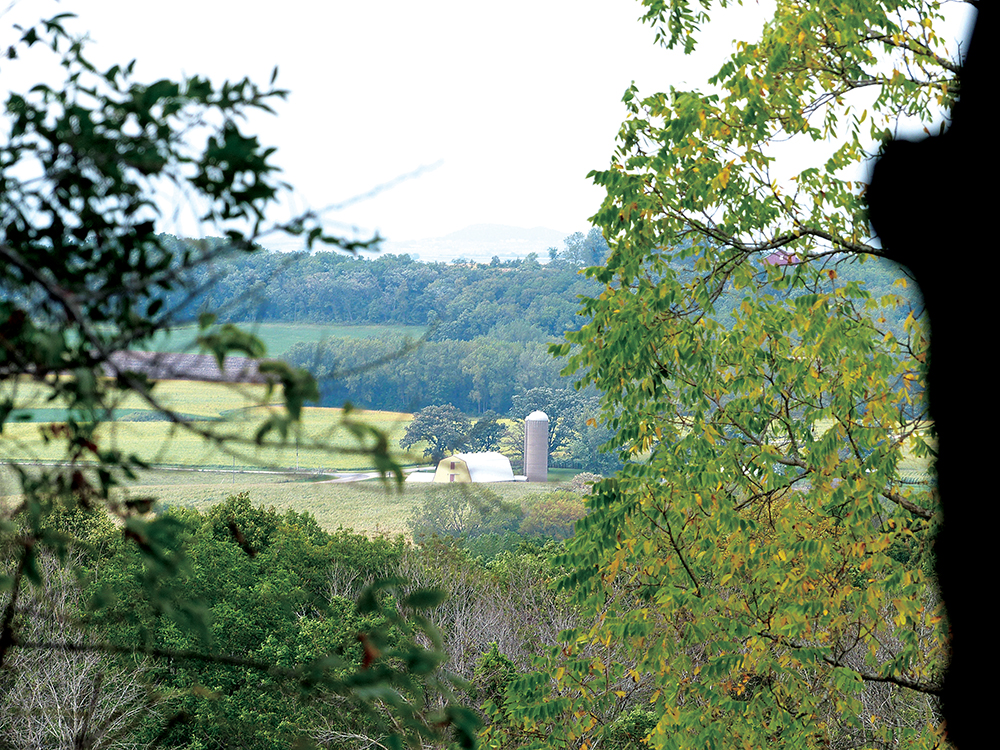 To the best of our knowledge, Charles Mound is natural. It should be noted, however, that Effigy Mounds is not that far north, on the Iowa side of the Mississippi River. The Effigy Mounds complex consists of over 200 mounds, built in the shape of birds and other animals. Southern Wisconsin also has such prehistoric mounds, so the origin of Charles Mound may not be totally certain.

What is obvious, however, is that the terrain of the northwest corner of Illinois, basically Jo Davies County, is very different than the typical prairie of northern and central Illinois. Known, as the “driftless” area, it was not covered by the most recent ice age glaciers, and thus escaped the flattening action of the glaciers and has picturesque rolling hills. The “driftless area” also covers parts of northeast Iowa and southeast Minnesota and a chunk of southwest Wisconsin. The change is dramatic as you enter the area via Highway 20 from the east (as opposed to coming up along the Mississippi River with its bluffs).

Southern Illinois, of course, is noted for its forested hills and valleys, but the overall elevation declines as one goes south. Cairo, at the confluence of the Mississippi and Ohio Rivers at the far southern point of Illinois, is just 315 feet above sea level, barely 100 feet higher than Tallahassee Florida. Peoria, by the way, is less than 450 feet at the riverfront.

Charles Mound is named for Elijah Charles, one of the area’s first settlers. He began farming near the mound in about 1828. The area remains farmland and is privately owned, but is open to the public on select weekends. (For dates and more information on visiting, you can check the Highpointers Club website, www.highpointers.org)

Scales Mound, a small village northeast of Galena is the closest town. Drive east and then north from Scales Mound to Charles Mound Road. A short distance to the east you leave your car on the side of the road and head down an unpaved farm path, heading north. It is a steady, but gentle rise for a little more than a quarter mile. You then make a couple turns and continue at a slightly steeper grade, until you reach a large red barn that sits at the base of the Mound. You turn again and head up a moderate but short slope to the top of Charles Mound. A hand-lettered wooden sign, and metal survey markers sunk in the ground mark the highpoint. I’d guess the total hike is about 3/5 of a mile more or less.

Trees to the south, and private property to the west restrict the views on those sides, but the north and northeast view is open and wide. In the summer, fields of golden corn stretch into Wisconsin.

While some authorities rate Charles Mound as the 32nd most difficult highpoint of the fifty states, you don’t have to be a mountain goat to climb it—which gives highpointers like me hope that we can perhaps reach half of the highpoints without resorting to a helicopter ride.

It is a much quicker and easier hike back to the road. Funny how that works when the trip is almost all downhill!

If you are looking for a pleasant hike with the added bonus of “bragging rights” for conquering a “high point” I would recommend Highpointing Illinois.