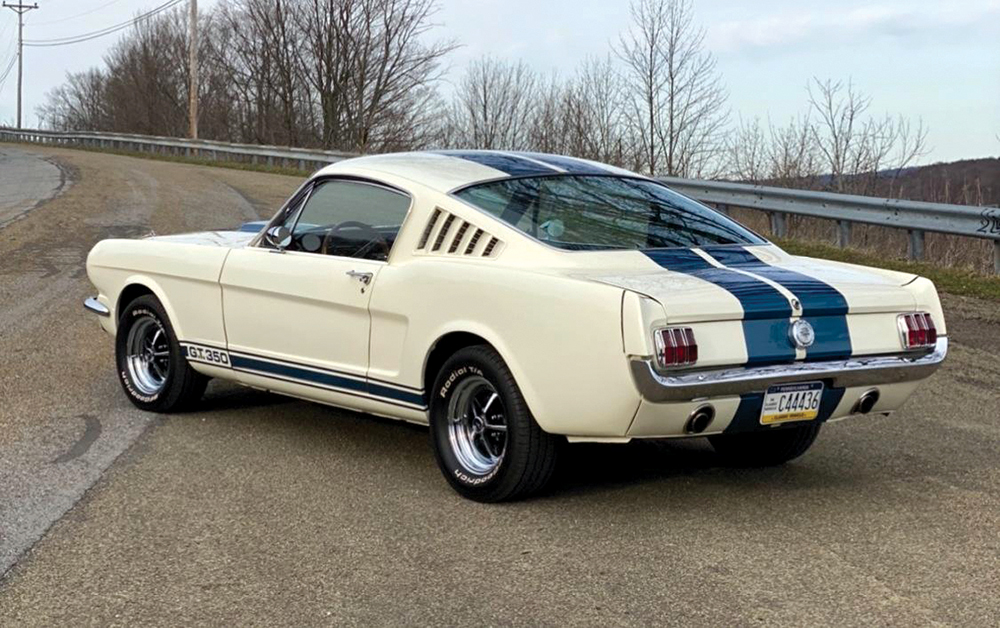 (Author note: I’ve received several letters recently from readers inquiring about 1965 Mustang GTs, so I contacted a friend, Scott Shipman, who has a beautiful example and here’s the letter and photos he sent).

Greg, my 1965 Fastback Mustang GT is a factory original GT with a fold down rear seat. Most of the car is original except for the Wimbledon White paint with Patriot Blue Stripes, Magnum 500 wheels and Goodrich tires, dashboard, bullet side mirrors, and some of the interior.

The engine is a 289 A-code (four-barrel), bored .30 over and it’s now putting out around 350 horsepower. The transmission is the original T-10 four-speed top loader, with Hurst shifter of course.

I upgraded the carburetor to a Holley 650 with manual “double pumper” secondaries, Carter fuel pump, Champion spark plugs, PerTronix electronic ignition and a PerTronix flame thrower coil. The rear end is an 8-inch positraction with a 3:50 gear ratio.

It has front disc brakes from the factory to help bring her to a stop. There is no power steering but it’s tight and a very fun car to drive. Its curb weight is light, so it’s easy to light up the rear tires.

I bought the car in August 2018 when I was actually looking at Chevelles. My dad found this car online and sent me the link to it. As soon as I saw the Mustang I knew I had to have it so I rented a car trailer and with my Dad, Michael Shipman, and a family friend, Rodney Phillips, we traveled some six hours from Sullivan County, Pennsylvania, to Taunton, Massachusetts, to buy it. If you’ve ever been through Massachusetts during rush hour, you’re not missing anything as traffic was horrible. However, I didn’t care because I kept looking at the car in my rear view mirror (on the trailer). We got a lot of thumbs up on the way back home, too.

I always wanted to buy a muscle car ever since I was a little kid. My Dad would always tell me stories of the numerous muscle cars he had back in the day and how he would work on them and drag race. I always thought that was cool and he always said he wished he still had certain cars that he had sold. So, I think I am going to take his advice and keep this one until I can’t drive anymore.

I have taken the car to a few car shows and have won first place along with my Dad and his 1967 RS SS Camaro. I drive it every chance I get and feel I made a good investment. Thank you for thinking of me and my car.

Scott thanks for all the info and photos of your ’65 Mustang GT350. It’s a tremendous example of an original GT turned into a tribute GT350. It was in April 1965 that the Mustang GT option arrived, featuring improved instrumentation, auxiliary lamps, front disc brakes, GT trim and polished exhaust tips, all of which your car has.

The Shelby version of the GT350 also arrived in ’65 and was built specifically for B/Production SCCA racing eligibility. SCCA rules mandated that 100 street-legal versions of the Shelby Mustang had to be produced, which Shelby easily exceeded and built an average of 2,000 units each year from 1965 to 1970.

When considering the fact that just 562 “regular” GT350s were built compared to the race ready Shelby GT350, your Mustang GT350 becomes an even rarer commodity. Further, when we look back at that year, very few Mustangs survived that lived in the inclement weather states and fell to major rusting. Most all of those rusted 1965 Mustangs, GT or not, ended up in the junkyard.

From the factory, all 1965 GT350s were painted in Wimbledon White with the blue rocker stripes. Further, only 25 percent of the 562 GT350 Mustangs built in 1965 had Le Mans stripes. However, owners and even the dealers back then added the full length body stripes as today most of the few, really nice GTs I see at car shows have the full length blue LeMans stripes. I emphasize “few GTs,” as seeing a really clean 1965 Mustang in any trim is really a treat.

As your Mustang was indeed a performance model back in 1965, that four-speed Borg-Warner T10 was the one specific transmission available. The 1965 GT350 had a full size spare tire mounted in place of rear seats, making it a two-seat-only vehicle and thus allowed to race under SCCA regulations as a true sports car. These Mustangs also featured either silver-painted steel wheels or special magnesium center “Cragar Shelby” 15-inch rims with chromed center caps marked with a stylized “CS”.

Your engine bay is outstanding, and sure looks the part of the Shelby version with the valve covers and upgrades you made. The interior, too, is spotless. Take care of your beautiful, rust-free ’65 Mustang GT, because these days you just don’t get to see many from back then, this nice.

Thanks for all your help, Scott, in allowing my many Ford fan readers to see your Mustang, the changes you made and how you came to own it.