The Uplands Neighborhood in Peoria 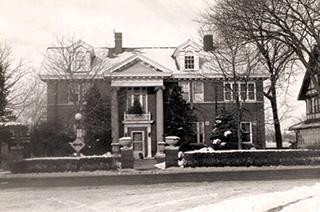 Tree-lined streets, stately homes, wide sidewalks, and boulevards come to mind when thinking of The Uplands. The neighborhood turns 119 years old this year. The area, first known as the Bradley Farm, was purchased for development by the Briggs Company of Toledo, Ohio, with the stipulation that the Central Railway extend its tracks to the new subdivision. The developers wanted to ensure that no lot was more than two blocks from the streetcar line.

Over 4,000 entries were submitted in a contest to name the subdivision, with $50 in gold to be awarded to the winning entry. Mrs. William Ker was the winner with the name “The Uplands.” She donated her winnings to the Bradley Home for Aged Women.

The Uplands neighborhood was to boast asphalt roads, cement sidewalks, and 2,000 trees even before any of the homes were built, for a “fine suburban residence addition to the city,” according to a sales brochure. The subdivision, bounded by Main Street, University Street, and Parkside Drive would have a total of 400 lots. Mr. Briggs, one of the developers, convinced Lydia Moss Bradley to donate additional land so that park land surrounded the west and north edges of the subdivision.

The lots went on sale at 9am, Oct. 22, 1902. By 5pm, two-thirds of the entire plat had been sold. The remaining lots were to be sold as syndicate shares, and this didn’t take place until after the shareholders’ meeting on May 28, 1903. At that time, the remaining deeds were awarded through a lottery drawing.

The Uplands Residential Association, the first one in Peoria, was established in 1903. The Association hosts neighborhood picnics and other activities. The neighborhood has even come together to fund sidewalk snow removal through voluntary contributions—a unique approach to solving a problem in an area where sidewalk traffic is frequent.

Over its 30-year history, the Grand Tour of West Bluff Homes saw many Uplands homes opening their doors to fascinated visitors. Proceeds from the tour helped finance neighborhood signs and gardens as well as West Bluff improvements. The Symphony Guild had a lengthy history of decorating a home on the West Bluff for their home tour as well. In 2019, James and Christine Kemper included their lovely home on West Parkside Drive on the Peoria Historical Society’s Holiday Home Tour. The home was built for the Batchelder family in 1904 and was designed by Frederic Klein.

Over the years, the list of Uplands residents included many prominent community, state, and national leaders. The residents have worked to maintain and beautify their neighborhood and have a strong sense of pride in their close-knit, yet diverse community. The neighborhood remains one of the most desirable in the city.